Finding Hope, Not Hope - So, For Your Soul

The First Martyr of the Scottish Reformation - Patrick Hamilton

On the seafront in St Andrews, Scotland, bordering the Old Course just behind the luxurious McDonald Hotel, stands a monument with the names of four Protestant Martyrs: Patrick Hamilton; Henry Forrest; George Wishart, and Walter Mill. These men were burned alive between the years 1528 and 1558. This photo was taken when Harrison and I visited St Andrews in 2005. 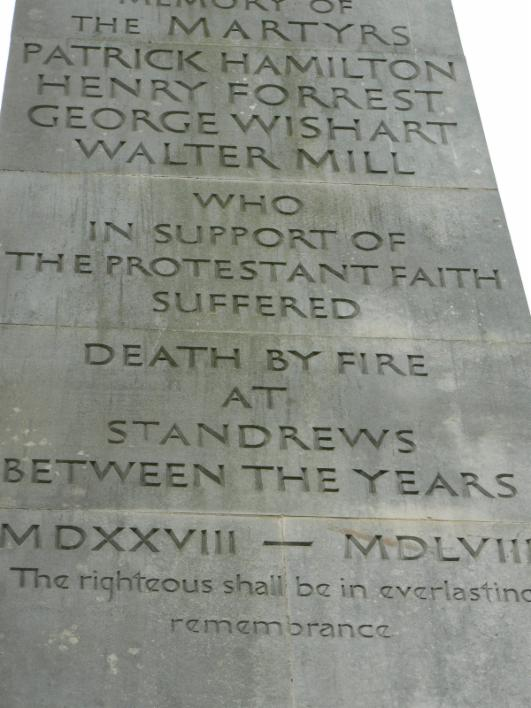 "Their deliverance was in their resurrection from the dead, not in their rescue." R.J.Rushdoony

It was the 1st of March, 1528 in St Andrews. The wicked executioners fetched more wood and gunpowder from the castle because the drizzling rain kept putting the fire out. The winds blew. The slowing burning fire smoldered six long torturing hours before Patrick Hamilton's body was finally reduced to ashes. When he was first brought to the stake he took off his outer clothes and gave them to a man standing near him. These will not profit me in the fire, but they will profit you. Hereafter you can have no profit from me except the example of my death, which I pray you keep in memory. For, though bitter to the flesh and fearful before man, it is the door of eternal life, being a release from this life into the presence of Christ, which none will attain who denies Christ Jesus before this ungodly generation.

In the bitter six hour agony, Patrick Hamilton manifested true heroism and unshaken faith. During this short time as he paid the ultimate sacrifice, he preached, prayed, exhorted and rebuked while friars and monks reviled him and called upon him to recant and worship Mary. After being prevented from further speech by the violence of the smoke, and the rapidity of the flames, he resigned up his soul into the hands of Him who gave it.

''How long, O Lord, shall darkness brood over this realm? How long will thou suffer this tyranny of man? Lord Jesus, receive my spirit." It was Patrick Hamilton's last prayer. In the bloom of early manhood, Scotland's first Reformation Martyr was put to death; however, his death was not in vain. A Romanist afterwards said, 'The smoke of Patrick Hamilton infected all it blew upon.' His mouth was closed, but the story of his death was repeated by a thousand tongues. It inspired others to seek a martyr's crown, encouraging them to defend the truths for which he died. 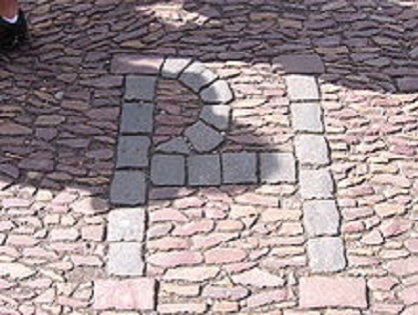 WHAT HAD PATRICK HAMILTON DONE TO WARRANT SUCH A HORRIBLE DEATH? Nothing! He committed no crime. He was among the most godly, learned men of his day. Having been influenced by Martin Luther while a student in Paris, he simply returned home to Scotland to preach the gospel doctrines he had learned to love. He, and hundreds of other Martyrs, who would later follow in his steps, were not afraid to rebuke the wicked and corrupt Romanist Catholic church, filled with superstitious traditions and papal power. Patrick was given no choice. If he renounced his biblical beliefs and bowed to the wickedness of Popery, he would be allowed to live. If he did not he would be handed over to the civil authorities and burned at the stake. To ease their own wicked consciences, a special commission examined Patrick's writings and preachings. It was a mock trial of sorts. Patrick defended the doctrines of Scripture. His judges, Archbishop Beaton and the bishops and clergy associated with Beaton, could not endure the truths spoken by their prisoner. Even though many people realized what was taking place, they thought the Archbishop would allow the young man to go free. Not so! As quickly as they condemned him, the stake was prepared so as to avoid any possibility of his rescue by family and friends.

Even as the twenty-four year old Patrick Hamilton was dying, the Catholic Church mocked him, calling upon him to recant and cry out to the Virgin Mary to save him. Only hours after Patrick's death Archbishop Beaton hosted an elaborate party to celebrate his accomplishment.

WHAT TRUTHS DID PATRICK HAMILTON PREACH? Patrick Hamilton, greatly influenced not only by the reforming teachings of Martin Luther, Philip Melancton and Erasmus, preached against the Romish religion. He publicly disapproved of pilgrimages, purgatory, prayers to saints and for the dead, etc.  Patrick preached justification by faith alone, through Christ alone,by grace alone; that all men should be allowed to read God's word for themselves; that masses held for the dead were not only useless but wicked and blasphemous; that the Pope had no power to forgive sins; that none were saved without being predestinated by God, and no unregenerate man had a freewill that enabled him to choose Christ without the Holy Spirit first regenerating his heart. 9  Scripture, threatened the priesthood's chief source of revenue. The Church leaders were enraged. They could not allow their years of thievery to be exposed, much less to be cut off completely. They also feared if the common people read God's word they would likely be freed from their blind, enslaved condition brought on by the Church's heresy. That alone would undermine the Church's existence. The Romanist Catholic Church could not let this happen.

The summation of it all was that Patrick Hamilton preached biblical doctrine, "That system of belief taught by Christ and His apostles."10  It is the same biblical doctrine that many preachers and teachers today brag about hating. Because they too despise the genuine truths of God's word, their minds have also become darkened and enslaved. Is it any wonder that in spite of the Reformations and the deaths of so many Martyrs, Catholic and even Protestant churches today are filled with doctrine-haters who unashamedly prefer their own arrogant reasonings to the truths of Scripture? As deceived as they are, doctrine-haters happily embrace easy-believism, mysticism, extra-revelation, psychology and all sorts of heathen philosophies. Some of the same sins that prevailed in the Romanist Catholic Church back then still prevails today, among many churches, teachers, and writers.

Dear Reader, if you have ever tasted the gospel doctrines in the past, and were persuaded that everything you needed was to be found in the fulness of God's wisdom, ask God to restore you to those truths. "For we shall never be teachable before God, nor ever be prepared to benefit in His school, unless we rise above the world and reverence the things that God speaks with His own holy mouth. So-called 'truth' that is outside the doctrinal truth taught in Scripture, is not only a waste of your time, but harmful to your soul. God's word is full of substance. Nothing needs to be added to it. It alone offers you the complete and satisfying nourishment you are looking for."

Recommend this page on: